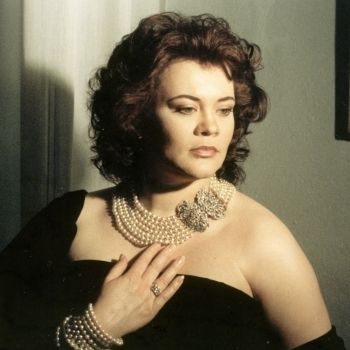 Biography of Violeta Urmana - mezzo-soprano. Born in Lithuania, Violeta Urmana is one of the most highly sought-after singers of dramatic German and Italian repertoire.

At the very beginning of her career, Violeta Urmana made a name for herself worldwide as a highly acclaimed Kundry in Parsifal and as Eboli.
In recent years she has played such parts as Amelia in Un Ballo in Maschera, Elisabetta in Don Carlo, Leonora in La Forza del Destino, Lady in Macbeth, Odabella in Attila, the title roles ofAida, La Gioconda, Medea, Tosca, Norma, Iphigénie en Tauride and Ariadne auf Naxos, Brünnhilde in Siegfried, Sieglinde in Die Walküre and Isolde.

As a highly acclaimed concert and recital singer Violeta Urmana performs music by Mahler, Richard Strauss, Schoenberg, Berlioz, Wagner and Verdi in the most famous concert halls of Europe, the United States of America and Japan.

Among her future plans are Santuzza in Cavalleria rusticana in Milan and New York, a song recital at the Schubertiade in Schwarzenberg, Eboli in Don Carlo in Buenos Aires, Santuzza in New York, Kundry in Parsifal and Amneris in Aida in Vienna, Judit in concert performances ofDuke Bluebeard’s castle in Vienna, Amneris at the Metropolitan Opera, as well as many concerts throughout Europe.

Violeta Urmana has received many awards: in London the Royal Philharmonic Society Award for singers, in Vienna the title Österreichische Kammersängerin. Her homeland of Lithuania has given her its most important award: the order, third class, "Grand Duke Gedeminas of Lithuania". The Lithuanian University for Music and Theatre in Vilnius has awarded her an honorary degree.
In 2014 she was awarded the Commendatore dell'Ordine della Stella d'Italia by the Italian State President Giorgio Napolitano.